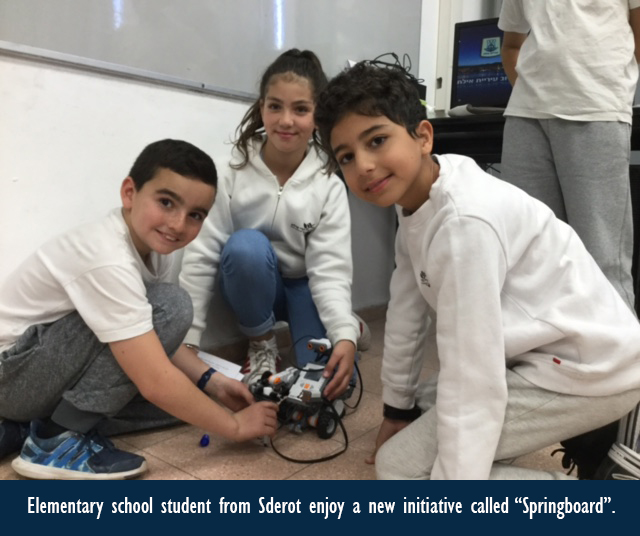 A unique project, initiated by UJA Federation of Greater Toronto, has created an innovative partnership between schools, philanthropy and the private sector.

The project involves some 50 elementary school pupils from the town of Sderot, a UJA Federation partner community located just one kilometer from the Gaza Strip and which has been the frequent target of rockets fired from Gaza.  UJA Federation has been a staunch supporter of Sderot for almost twenty years, developing and funding programs which strengthen the town’s resilience, expand opportunities for children and youth, and encourage young adults to move to Sderot.

Once a week, the children travel after school to the gleaming offices of Amdocs, located just outside Sderot.  There, in the plush meeting rooms, they study mathematical thinking, taught by a team of Amdocs professionals, all of whom volunteer their time.  Some 30 Amdocs personnel, all of whom underwent special training, are involved.

The program, called “Springboard”, encourages curiosity, innovation and investigative skills. “The program introduces pupils to the exciting and challenging world of high-tech, and strengthens their motivation to succeed,” explains Eddy Azran, UJA Federation’s representative in Sderot, who helped develop the project.

Springboard is run as a partnership between Amdocs, the Sderot Municipality, UJA Federation of Greater Toronto and the Rashi Foundation.

The participating pupils were carefully selected on the basis of attitude, motivation and team work skills.  Explains Michal, the mother of one of the children:  “My son just loves it.  I wish I had had a similar opportunity.”

Adds Sima Ezra, principal of the Shikmim elementary school:  “I am thrilled that our school has been chosen to join the pilot project.  The educational system in Sderot has undergone profound changes in recent years, and this includes giving bright pupils the chance to excel.”

The program is part of UJA Toronto’s STEM initiative, which is significantly strengthening the teaching of math, science and technology in each of its three partnership regions – Eilat-Eilot, Sderot and Bat Yam.