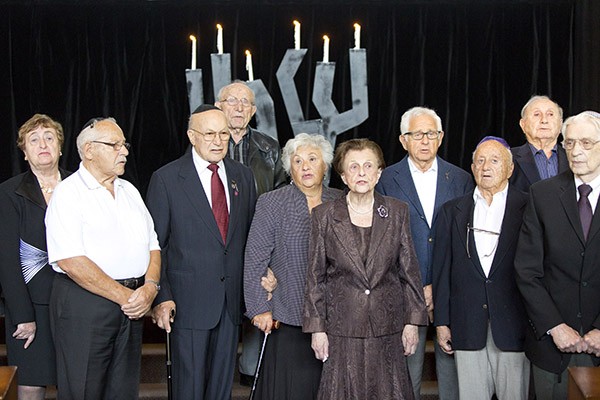 UJA’s Neuberger Centre’s Community Holocaust Commemoration program filled Adath Israel Congregation on Sunday, April 23, with approximately 800 people on hand to commemorate the 6 million victims of the Shoah. The audience included Holocaust survivors and their families; Toronto Mayor John Tory; as well as city councilors, MPs and the Honourable Ahmed D. Hussen, Federal Minister of Minister of Immigration, Refugees and Citizenship. The program included a very moving tribute to Eli Wiesel z”l, a film featuring the educational activities of the Neuberger, as well as a short film demonstrating how Hillel commemorates the Holocaust on campus. The candle lighting ceremony was led by Holocaust survivors who were joined by their families on stage. Cantor Alex Stein of Adath Israel led the community in heartfelt singing. This year’s program was co-presented by the Neuberger and FAST (Fighting anti-Semitism together). Pictured above, as part of the moving program, Holocaust survivors recite the Kaddish together. (Photo by Michael Rajzman).