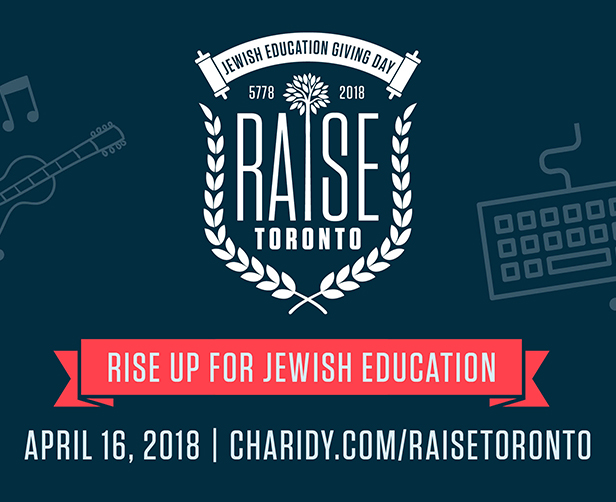 For one hundred years, Jewish day school education has shaped the face of Toronto Jewry into what it is today – one of the world’s strongest Jewish communities.

Our schools range in religious affiliation, demographics and Jewish philosophy. Despite any differences, our day schools are uniting once again to hold a 24-hour crowdfunding campaign, organized by Charidy, to raise funds for Jewish Education.

On April 16 starting at 11 am until Tuesday April 17 at 11 am, 14 Jewish day schools are asking the community to ‘Rise up for Jewish Education’, setting their sights on raising a combined $2 million for their ‘Raise Toronto Giving Day’ campaign.

The online campaign runs on an all or nothing model. Each participating school has found three donors, or groups of donors, to match donations. This means that every donation made during the 24 hour online campaign is quadrupled. If a school fails to meet a minimum threshold, all donations will be returned.

Last year, nine Toronto day schools brought in $1.9 million. Thanks to over 2,400 donors, the schools nearly doubled the $1-million goal organizers had set.

This campaign demonstrated the power of the individual and the power our community. With the largest donation being $40,000 and the smallest being $1, every donation counts. Donors can choose to contribute to an individual school, or to the campaign’s ‘Everyone Fund’ which will divide funds equally among participating schools.

Toronto benefits from North America’s strongest and most diverse day school system – one that has shaped the face of our community and informed its current strength.

Studies have shown that day schools graduates, compared to those with less or no Jewish education, go on to contribute vastly to their communities through volunteerism and taking on communal leadership roles. Day school alumni express a stronger commitment to addressing the needs of the larger society and a greater desire to make a difference in the world by helping those in need.

It is our job, as a community, to come together in support of our day schools and rise up for Jewish education. Anyone can make a difference. No donation is too small. Visit https://www.charidy.com/raisetoronto on Monday April 16th to make a difference and #RaiseToronto.