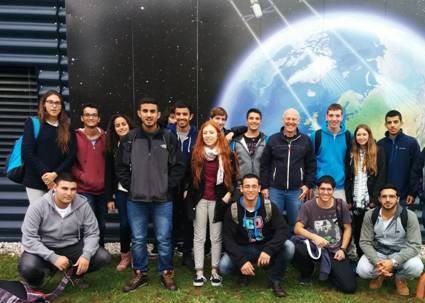 Seventeen high school students from the Israeli regions with which UJA Federation of Greater Toronto is partnered are currently visiting the CERN particle accelerator in Geneva, Switzerland.

The twelfth-graders – fifteen from Eilat-Eilot and two from Sderot – are all participants in UJA Toronto’s STEM education initiative, which aims to reverse the troubling decline in science achievements in Israeli schools.  The initiative was developed in partnership with the Jewish Agency, the Rashi Foundation and the Ministry of Education.

“The biggest physics experiment ever carried out by humankind is being conducted in CERN in Switzerland – the Large Hadron Collider,” explains Dr. Amnon Yosef of the Ilan Ramon Science Center in Be’er Sheva, which has coordinated the trip to CERN.  “In 2012, the Higgs particle was discovered in the accelerator, and the inventors of the theory that predicted its existence were subsequently awarded the Nobel Prize.  This is the kind of cutting-edge experimentation which gets students really excited about physics.”

In Geneva, participants are hearing lectures from scientists who work in the most advanced fields of physics.  They will of course visit the accelerator, the various control rooms and other detectors and experiments conducted at CERN.  “We are also building a particle detector called a ‘cloud chamber’ which will help us understand the principles on which the particle accelerator works,” reports Elad Shoham of the Goldwater High School in Eilat.

The students have been carefully selected.  Before departing for Switzerland, they spent many hours in the classroom studying the physics behind the experiments conducted at CERN.  “We learned about elementary particles, superconductivity, the structure of particle accelerators, the structure of detectors, quantum theory, cosmology and dark matter,” explains Shoval Abekasis of AMIT Gutwirth High School in Sderot.  “None of this is necessarily part of the regular curriculum.”

Upon their return, the students will be expected to discuss the trip with younger students in their schools, in order to inspire others to study advanced physics.

UJA Federation of Greater Toronto’s STEM education initiative was launched in 2013.  STEM is an acronym for science, technology, engineering and math.

“We were concerned that fewer and fewer pupils were choosing to study science in high school,” exclaims Honey Sherman co-chair of the Israel and Overseas Committee of UJA Toronto.  “As a result, Israel has been regressing from ‘start-up nation’ to ‘slow down nation’.”

To reverse this decline and to promote social and economic advancement, UJA Toronto developed a systematic approach to strengthening STEM education in Israel.  It has worked closely with universities, research centers and municipal education departments in order to tackle the root causes of the weakness of STEM education.

“Broadly, the aim of the initiative is to increase the number of high school students who obtain a full matriculation diploma in science, and who go on to study STEM subjects at university,” says Danny Peretz Science  Education Director .Rashi Foundation

Programs funded by Toronto involve children from grade one through grade twelve, including under-represented and disadvantaged populations.