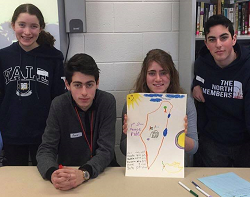 The values of Sparks dovetail with the elements of Israel Engagement, especially the emphasis we place- together with our partners- on bringing people-to-people relationships between Diaspora and Israel while exploring contemporary Israel. The Toronto delegation brought 4 Jewish teens from Misgav High School and 4 Arab teens from Al Basheera School, both in the northern part of Israel. The communities are 15 minute drive from each other. The students had not met prior to being accepted into this competitive program.  They were accompanied by a teacher from each of the schools and a Director from Oranim College.

The delegation spent the week visiting four Toronto Jewish Day Schools working with students in grades 4-8 on understanding their life in Israel working toward developing understanding and mutual respect. As one teacher commented, "In the three years I have been teaching here, this has been the best day I have ever had." And with tears in her eyes, she continued that that this group of young leaders gave her hope for the future.

The group also had the opportunity to explore their own identities with the ShinShinim and students at Westmount Collegiate Institute. They delved deeper into the dangers of bias with the Diller Teen Fellows.  Throughout the week, the 8 teenagers were given a glimpse into understanding Jewish life in the diaspora, and how Israel is taught to our students.

The teachers and the students were hosted by families from the day schools involved in the project.  Both the families and the students were struck by the incredible connection that was made between them in such a short time.  These eight teenagers set out to change perspectives, show the similarities in their lives, and that friendship between the two groups is undeniably possible.