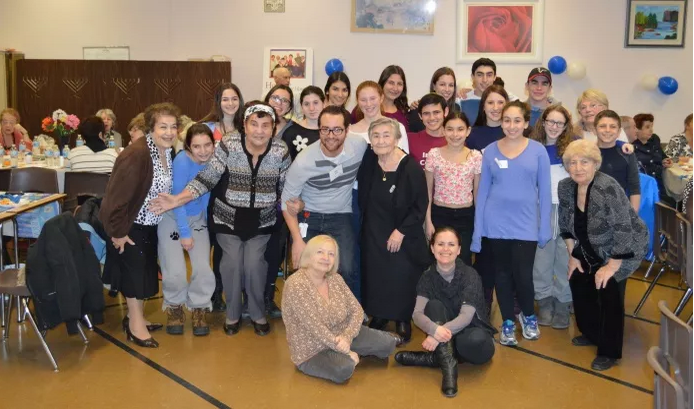 On Sunday December 7th, and with Chanukah just around the corner, participants of the Jewish Foundation of Greater Toronto’s B'nai Tzedek Teen Philanthropy program had the opportunity to learn how to make latkes and applesauce from noted cookbook author, Norene Gilletz at the Prosserman JCC, located on Sherman Campus.

The Jewish Foundation is UJA Federation of Greater Toronto’s endowment and planned giving arm.
After preparing over 200 latkes and blueberry applesauce at the Prosserman JCC’s Zas & Stella Feitelson Culinary Arts Studio, the teens, together with volunteers from UJA Young Leaders and UJA Federation's Community Connect, boarded a bus which took them – and the tasty treats – to some of our community’s seniors, all of whom are beneficiaries of UJA Federation’s Healthy at Home program, run by the Bernard Betel Centre.
Healthy at Home brings programming into buildings along the Bathurst Street corridor where low-income, isolated seniors live.

Over 60 seniors attended Sunday’s Chanukah celebration which included live music from a violinist and pianist, and were delighted to eat and dance together with the young members of our community - members of the B’nai Tzedek Teen Philanthropy initiative support programs and projects through their charitable funds as well as through them volunteering their time.

“We are excited to be here and to have the opportunity to get to know you a bit this afternoon,” Maxwell Charlat, Teen Chair of the B’nai Tzedek program, told the seniors, many of whom were Russian, through a translator. “We consider ourselves honoured to be here with all of you, and to celebrate the joy of Chanukah together, young and old alike.”