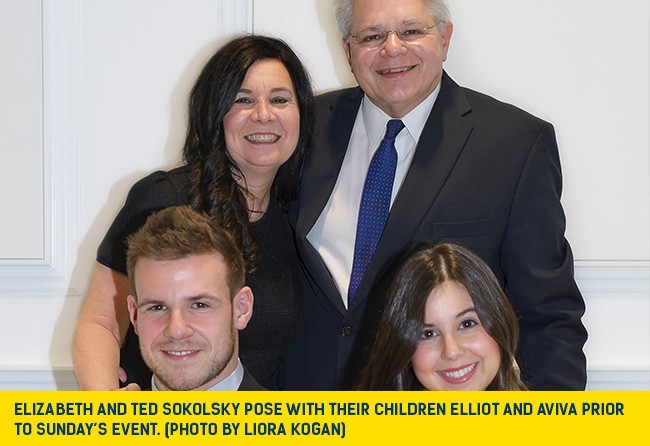 By Dan Horowitz--Some 250 members of the GTA’s Jewish community made their way to Vaughan’s Joseph & Wolf Lebovic Jewish Community Campus on Sunday evening to honour Ted and Elizabeth Sokolsky for their years of dedicated service on behalf of Toronto’s Jewish community.

The event, chaired by Bonnie Goldstein and Linda Waks, was held at the Leo & Sala Goldhar Conference and Celebration Centre and included politicians, community leaders and philanthropists, many of whom spoke on behalf of the visionary couple and their many accomplishments on behalf of Jewish life in the GTA and in Israel.

Natan Sharanksy, the Chair of UJA Federation’s overseas partner, The Jewish Agency for Israel, sent greetings by video which was followed by a special live performance by A cappella group, the Varsity Jews.

“As president and CEO of UJA Federation, Ted’s visionary, forward-thinking, coupled with his remarkable leadership skills, have been vital in understanding the value and importance of keeping our flourishing community united and strong,” said Perlis. “Tonight is the perfect opportunity to thank Ted for his vision, foresight and determination in making Toronto’s Jewish community one of the best Jewish communities in the Diaspora – a community often spoken about in glowing terms by Jews around the world.”

Elizabeth Sokolsky, a successful community professional with over 30 years in communal work, continues to be a driving force behind the Taglit-Birthright Israel program, contributing immensely to its overall popularity and success. Since its inception 15 years ago, nearly 500,000 participants have been sent on a Taglit-Birthright Israel trip, of which close to 18,000 are from Toronto.

“We are so humbled and at the same time so proud to be a part of a community that recognizes the work of the professionals who dedicate their lives to the Jewish people,” said Elizabeth. “Strong Jewish communities and organizations are not the result of any one person’s efforts. It takes a true and trusted partnership between visionary lay leaders and professional teams - both willing to take risks  - so that together they can accomplish great things. Ted and I have both been so fortunate to have had this experience.”

“I look across this room and I marvel at what we all have achieved together; an incredible community in an amazing city and a wonderful country,”  said Ted. “However, these are things that don’t happen by accident. They have happened because each generation that preceded ours wanted to leave a legacy of a better life for their children and grandchildren. They happened because good people worked together to make dreams a reality.  Wonderful caring and unselfish leaders who wanted to build a future together and took the risks that others might not have been willing to take. I love what UJA Federation stands for and believes in.  All that we come to take for granted in our community and our Jewish world today has only come about because others made a choice to shape their futures and not to comfortably sit in the stands merely as observers and critics.  And in building that future they made one for us and our children.”

The evening culminated with a ribbon-cutting and the dedication of the Ted and Elizabeth Sokolsky Community Square on Lebovic Campus, which was led by Honey Sherman and Leslie Gales.