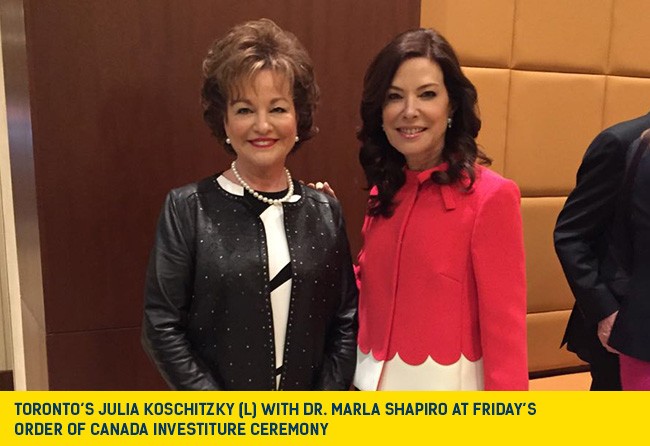 Governor General David Johnston presided over an Order of Canada investiture ceremony at Rideau Hall on Friday, as 48 distinguished Canadians joined or were promoted up the ranks. Among those invested was Julia Koschitzky, a prominent leader of the Toronto and Canadian Jewish community. Koschitzky’s generosity has strengthened the climate of religious tolerance and respect in this country.  She has supported Jewish-focused educational programming at the primary and post-secondary levels. Notable is her leadership and patronage of the internationally renowned Centre for Jewish Studies at York University and through UJA Federation’s Koschitzky Centre for Jewish Education. She also spearheaded the creation of the Canada House community centre, an important site of cultural exchange and interfaith co-operation in the core of Jerusalem.
“It was a most humbling and inspiring ceremony,” said Koschitzky pictured above at left with Dr. Marla Shapiro, who also received the Order of Canada. Dr. Shapiro is a leading voice in the public conversation on health care in Canada. Her passion for women's health has benefited patients in her practice as well as the broader public, as she provides the knowledge, support and tools they require to take greater control of their own health and well-being.