By Laura Kindler--What began, on February 6, as a fact-finding mission for Incoming United Jewish Appeal (UJA) Campaign Chairs Jack Frieberg and Lori Rosenthal, as well as the Chair of UJA’s Women’s Philanthropy, Carol Grubert, ended, on February 9, as a heart-warming journey into the lives of the many Israeli youth who benefit from the vision and support of UJA Federation of Greater Toronto. 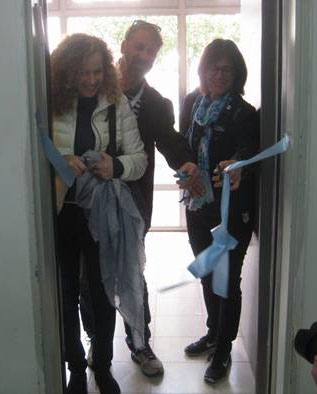 The Incoming Chairs came to learn how  dollars donated to the annual UJA Campaign, have an impact in Israel and get to know first-hand Federation’s Partnerships in Eilat-Eilot, Sderot and Bat Yam.

The first hours were spent meeting with professionals from two of UJA’s overseas partners - The Jewish Agency for Israel (JAFI) and the American Jewish Joint Distribution Committee (JDC) to hear how they are facilitating UJA Federation’s agenda on the ground in Israel and abroad, including briefings about aliyah and MASA.

Throughout the mission, the Incoming Campaign Chairs met with youth who are involved in the STEM education programs currently run in each of Federation’s three partnership regions.

Beginning in Eilat-Eilot, the Toronto representatives learned about the incredible effect that the STEM (Science, Technology, Engineering and Mathematics) initiative is having on students’ high school matriculation rates.  They also enjoyed meeting with teenagers who participate in the Diller Teen Fellowship, which brings them together with youth in Toronto.

The next day the Incoming Chairs met with youth in Bat Yam who are taking part in UJA Federation’s Cracking the Glass Ceiling program.

When Moriah was first accepted into the program she was very shy and had few friends.  More than two years later, the young woman is unrecognizable. Confident and goal-oriented she works hard at her studies and helps her new friends with their assignments.  Moriah hopes to become an Israeli diplomat, while a good friend of hers dreams of being an astronaut.  Both have the academic platform and the motivation to make their dreams a reality.

The Toronto campaign leadership also met with Amit, Stav and Biana who spoke in nearly fluent English.  The students are taking part in UJA Federation’s 10 Point English matriculation program.  This innovative program was developed in response to the need for Israel to keep its international lead in science and technology, for which English proficiency is essential.

Moving on to the Hashmonaim Secondary School, the Incoming Chairs took part in the dedication of a new chemistry laboratory which was funded by the UJA Federation Partnership.  They were impressed with the testimonials of the youth taking part in the unique 10 point physics matriculation program, a pilot initiative led by the Weitzman Institute.  Dr. Dov Trigerman, who is facilitating the physics program, helped to develop the Iron Dome and the instruments to detect the underground tunnels, together with his Weitzman Institute students.

Appropriately, the mission then traveled to Sderot where the concern of the tunnels is a daily matter.  After viewing the border and its security risks, they met with children and young adults who have had the resilience to stay in this city and make it strong.  These efforts are supported by UJA Federation, which is building up Sderot’s human capital through investment in education.  The chairs were hosted at the Amdocs high-tech facility where they learned about Amdocs’ cooperation with UJA in Sderot, and were greeted by the Mayor of Sderot, Alon Davidi.

Despite the whirlwind pace of the Incoming Campaign Chairs’ visit to Israel, the hearts and souls of the participants will be filled with stories and memories that will last a lifetime and inspire donors and UJA Federation recipients alike.

UJA's support is transforming vulnerable populations, offering opportunity and possibility where once there was none.  Through innovative programs which provide equal opportunity education to the remote and isolated region of Eilat-Eilot, the security-challenged town of Sderot and the large new immigrant population in the economically disadvantaged city of Bat Yam, UJA is changing the socio-economic and cultural landscape of Israeli society.