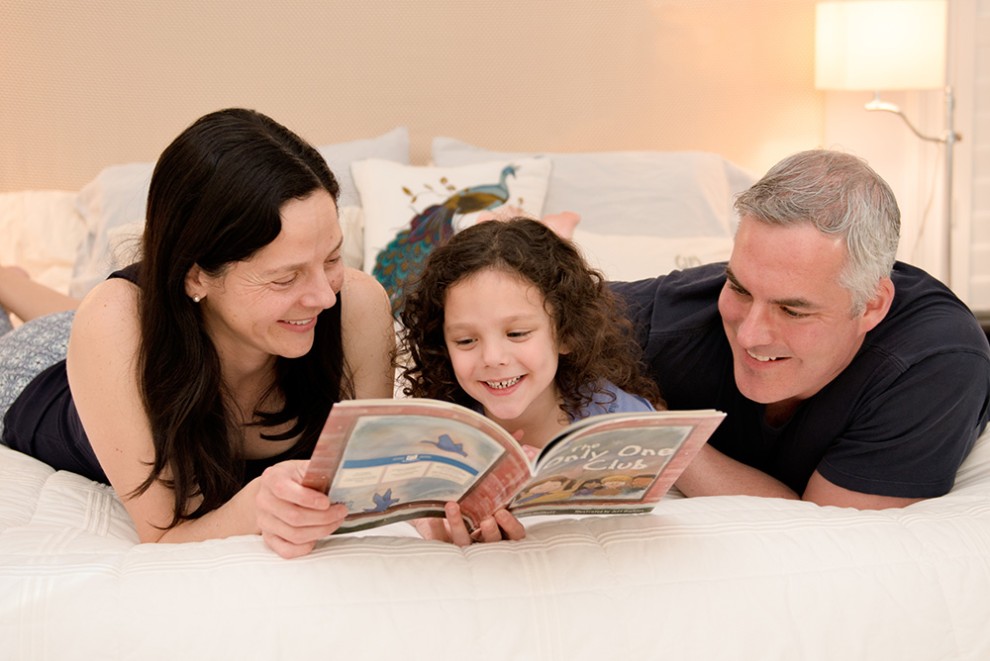 The early years of raising a family are important for Jewish engagement. The earliest moments of a child’s life, when parents are re-orienting themselves and their relationships, establishing their parenting styles and embracing a new realm of responsibility is the moment when they are also setting a Jewish trajectory – one that will guide their Jewish lives and those of their children.

PJ Library, a collaboration between the Harold Grinspoon Foundation and local federations, sends the gift of free Jewish children’s books to kids aged six months to eight years. In the GTA over 6,500 books are mailed to families each month. Sixty-two per cent of Jewish children in Toronto currently receive PJ Library books. Nothing else reaches such a wide swath of our community.

PJ Library aims to transform the home into the centre of Jewish identity formation. These monthly gifts are transforming families and providing an opening to greater Jewish involvement. Inside each blue and white PJ Library envelope is a new opportunity to connect: a new Jewish idea, a new Jewish value, a new Jewish holiday tradition, to integrate into a family’s lifestyle. Families are finding themselves in the Jewish stories and finding their place in the larger Jewish story.

A recent national survey of PJ Library families, confirms the program’s impact in forming Jewish educational relationships between children and their parents. 91 per cent of respondents said that PJ Library has supported them in building upon or adding, a Jewish tradition to their home life, and 88 per cent shared that PJ Library has supported them in having conversations about Jewish traditions, values or customs with their children.

“I can say sincerely that without our involvement in the program, I never would have thought to buy the kids Jewish or Israel-themed books. Yet, they have enriched my family’s life in such an unexpected way and filled a void my husband and I didn’t even know existed.” – Marni, PJ Library mother from Thornhill.

PJ Library also strives to bring Jewish values straight to families’ doorsteps, providing a gateway to Jewish participation and fan the spark ignited by the PJ Library program. Each month, thousands of families begin a Jewish experience with PJ and love it. The PJ Library survey demonstrates that, because of PJ, families are more interested in taking their next Jewish step. 70 per cent of PJ families in the GTA are interested in getting more connected to local Jewish organizations, activities and/or people. 25 per cent say that PJ Library has influenced their decision to enrol their children in a Jewish camp and 23 per cent say it has influenced their decision regarding Jewish day school and Jewish early childhood education.

Starting a family and raising children is a wild adventure, something for which we are never really prepared. Through the gift of PJ Library, we can use this critical moment to catalyze lifelong Jewish journeys.

PJ Library has a meaningful impact on families. Generous donors have made it possible for UJA to deliver over 322,000 Jewish bedtime stories, run over 120 PJ Library Events and engage over 645 children in PJ Plus weekly classes. UJA Federation wants to ensure that it can continue to provide this special and unique program to all families who wish to subscribe.

Today, until Thursday, June 20th at 10 am UJA is running a 24-hour campaign to raise $20,000 for PJ Library. All donations will be doubled thanks to a generous matching donor.

To donate to this special program and view our campaign visit www.charidy.com/PJLIBRARYTO. Pay it Forward for PJ Library!

Visit www.Jewishtoronto.com/pjlibrary to learn more about our PJ Library programs.