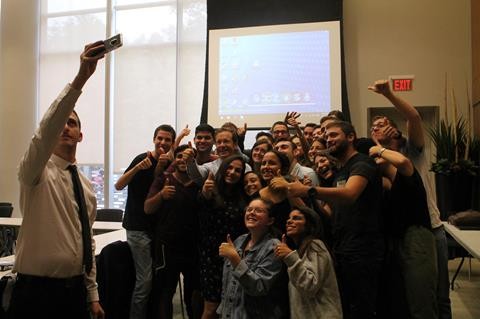 Isaac Hertzog, the new chairman of the Jewish agency, visited the new cohort of ShinShinim during their first week of work in the Jewish community.

During the meeting, we presented a set of questions to him that referred to our program’s value and how our job in Toronto has an impact on Israel’s society.

One of the things he said was that the biggest issue is that a lot of people misunderstand Israel’s democracy.

People lack an understanding that there are two sides to everything. The news focuses on outrageous and extreme stories, while largely ignoring positive narratives.

For example, Michal Luwis, an 18-year-old from Israel, has participated in a program called “Be’enaim Acherot” (In a Different Perspective), which brings Muslim and Jewish students together for a year to learn about about each other’s lives while studying photography. These young people take pictures together and present their paintings during the year. At the end of the program, both the Muslim and Jewish students fly to a camp in New York or Toronto for three weeks.

Here is an article written about this program by Michal:

There's one very common question that almost every one of us has been asked ever since we were capable of talking.

"What would you like to be when you grow up?" the adults always ask.

At first, they ask it jokingly- expecting fantasized answers such as "fairy"- which was my dream job as a little girl and seemed to me as a very possible thing at the time. Ever since then, my answer to this question has changed quite a lot of times, ranging from wanting to be a singer, to wishing to be a doctor.

My name is Michal Lewis. I am eighteen years old now and have just graduated from high school. I am Jewish, and I live in a really small village quite in the middle of Israel.

In the past few years, my answer has been the same. These days, whenever someone asks me that question, I say that my dream is to become a journalist.

I want to hear and tell people's stories. I want to bring truths to light and show people that sometimes, there is more than just one truth per story.

"Through the other's eyes", Giva'at Haviva's program in which I participated two years ago, is an experience I'll never forget, and has also helped me form this dream of mine.

In this program, I, alongside other teenagers (both Jews and Arabs) have had weekly meetings in which we learned photography, each other, and discussed just about everything under the sun.

Yes- everything. Cultures, politics, music, food, beliefs and more- we talked about it all. Even topics that most adults avoid- we didn't, because we knew that even after our most heated arguments- we all went back to being friends. We embraced arguments, as we knew that they are meant to teach us and help us understand one another rather than bring us down.

A philosopher named Erich Fromm said in one of his books that the way you describe things affects how you view them. If you say that arguments are like war- they will become a war, in which one side must beat the other. However, if you view an argument like a dance- in which every person can express themselves to enrich the conversation and show others a fresh point of view- it will become a dance.

I firmly agree with Fromm and believe that "Through the other's eyes" made me realize that as well. That, and much, much more, is the reason why this amazing program is the central reason as to why I want to become a journalist one day.

You see, until I became involved in this project, I knew so little and hadn’t met any teenage Arabs my age face to face. We live in separate cities, we go to separate schools and we speak different languages. Through this program I was exposed to a culture, a language and points of view different than mine. I was exposed to opinions that were different than my own and learned how about different ways to live other than my own.

I wouldn’t be lying to you by saying that I believe that this program alone will bring peace and make everyone believe in shared society. However, this year is the 19th year in which this program is running.

A place where someday, a shared society might just be possible.