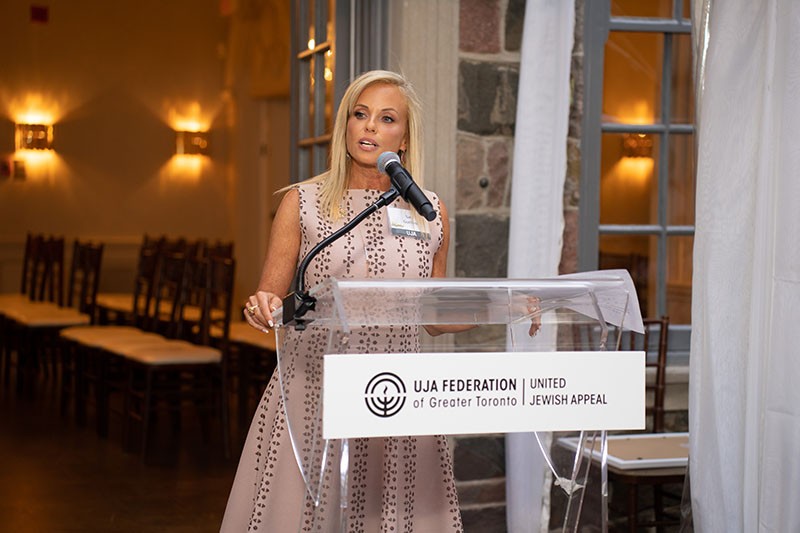 In conversation with Sara Gottlieb

On Monday, September 12, UJA launched its 2022 Annual Campaign under the leadership of Campaign Co-Chairs Angela Feldman and Richard Diamond, as well as Women’s Philanthropy Chair Sara Gottlieb. Sara sat down with UJA’s Brendan Steven for an interview about her years of service, why she’s passionate about strengthening the Toronto Jewish community, and her dreams for the future of the Jewish people.

I know you’ve been involved for many years, and in many different roles. What have been some of the more meaningful moments of your life in Jewish community?

I grew up in a family that has always been involved. My family helped raise money in the UK to support the establishment of the State of Israel. Here in Toronto, we’re fortunate that our family can support different causes but, UJA has always been our number one cause. I truly believe it should be everyone’s. No one gift touches so many lives..

I volunteered with UJA’s Bay Street division for many years, which was a great opportunity to be mentored and meet some of the more established people in the community who were doing great work. I got involved in National Young Leadership, where I really saw the depth and breadth of what UJA does. Then, I served with the Israel and Overseas Committee which as an ardent Zionist,  is perhaps my favourite role. I  then got involved with the Lion of Judah and Atarah Divisions and then co-chaired Major Gifts. So, as they say, I am on the UJA Highway!

It sounds like your parents’ example was critical for your Jewish journey.

Yes, following that example has important. I am so lucky they chose to live in Toronto. To me, there’s no greater place to live as a Jewish person other than Israel. My husband Darren, who is Co-Chair of Major Gifts, and   have  impressed on our sons Koby and Cooper that this doesn’t happen by accident. It takes foresight, thought and generosity. We cannot rest on our laurels. We need to leave something even better for future generations.

What does it mean to be Jewish, to you?

We have just sent our eldest son off to university and as he was leaving I said to him, “,you have the greatest gift in the world in being Jewish because you’ve already a member of the best club on campus!” You automatically have this connection with people—culturally, historically, and a sharedlove for the State of Israel. As Jews we care not just for our own family or our neighbourhood, but for Jews everywhere, wherever a Jew is in need.

When you were asked to serve as Women’s Philanthropy Chair this year, what led you to say yes?

You know, it wasn’t always obvious to me why a woman’s gift was so special. Why did we have a Women’s Philanthropy division? What I have learned is that a woman’s philanthropy is just the most incredible engagement tool for a family’s philanthropic journey. To bring women into the UJA tent and to speak of mine and other’s incredible experiences is such an opportunity. I had to say yes.

You’ve spent time in so many parts of this community, so you’re the right person to ask this question: what do you think are some of the greatest gifts this community brings to bear in the work of strengthening Jewish life, in Toronto and around the world?

An intense love for the Jewish people, and an intense appreciation for everything Toronto has. We have some of the most generous philanthropists here.

Why should community members give to UJA’s 2022 Annual Campaign?

I’m going to go back to what I said earlier: no one gift touches more lives.

Last but certainly not least, what kind of community are you hoping this coming Jewish generation will inherit from today's generation?

The same incredible community I was fortunate to grow up in. I hope we manage to stay strong and show everyone how wonderful it is to be Jewish, to be engaged in Jewish community, to continue our love for Israel and our strong Zionist spirit. I wouldn't change anything from how I grew up.