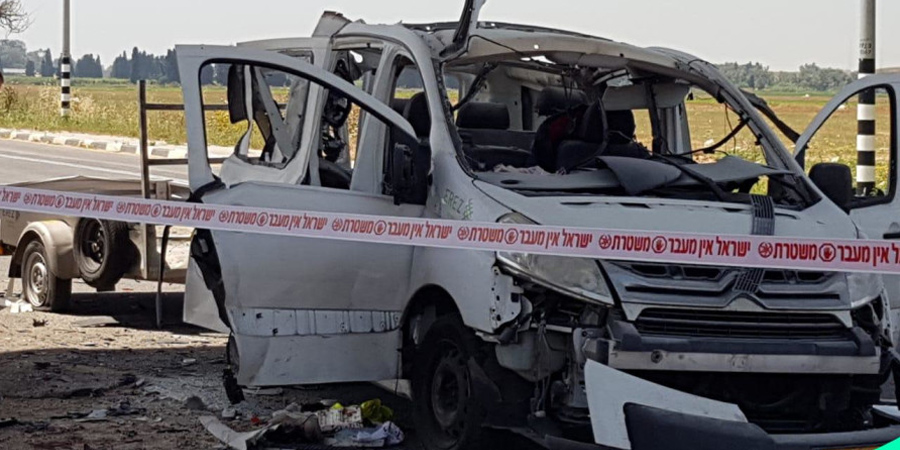 A vehicle that sustained a direct hit from a rocket near Yad Mordechai in southern Israel. (photo credit: POLICE SPOKESPERSON'S UNIT)

It has been a horrifying Shabbat and weekend in Israel. The south of the country has been under an incessant barrage of rocket fire since Saturday morning. So far, more than 600 rockets have been aimed at the entire southern region, including Sderot, one of UJA Federation of Greater Toronto’s partner cities, Ashkelon, Beit Shemesh, Lachish, Kiryat Gat and Ashdod.  Tragically, three Israelis have reportedly been killed since the rockets began to fall yesterday morning.

Schools in the entire southern region have been cancelled for Sunday (classes usually run on Sundays in Israel), along with many other activities. In some communities, citizens are forced to stay no further than 10 seconds from the nearest bomb shelter. The lives of hundreds of thousands of citizens in the south have been disrupted immensely.

A news broadcast, interrupted by a siren, can be seen here.

While many rockets have landed in open fields or have been knocked out by the Iron Dome anti-rocket defense system, more than 20 projectiles did land in Israeli population centres.

Moshe Agadi, (aged 58) from Ashkelon, died on his way to hospital after being hit in the chest by shrapnel from a rocket. At least two others have also been reported to have been killed by this act of terrorism.

In response, the IDF has targeted at least 200 military sites belonging to Hamas and Islamic Jihad in Gaza, hitting tunnel shafts, military posts, warehouses and weapons factories. In addition, some reports claim that the IDF also hit 30 homes of senior Hamas commanders.

In recent months, major flare-ups with Gaza similar to the current situation have occurred on a number of occasions. Each time, the fighting ended abruptly after around 24 hours. While Israel never formally acknowledged a ceasefire, it seems clear that an agreement with Hamas on a return to quiet was reached through Egyptian mediators on each occasion.

UJA Federation’s partners on the ground, including The Jewish Agency for Israel, The American Jewish Joint Distribution Committee, Jewish Federations of Canada – UIA and Jewish Federations of North America, are conducting evaluations and regularly assessing the situation. The Jewish Agency's Fund for the Victims’ of Terror will today distribute emergency funds to a number of victims whose homes were hit, as well as those who have been injured.

Birthright Israel currently has 10 groups on the ground in Israel, with 44 additional groups set to arrive next week. All groups have been moved to safe regions of the country and their safety and security are top priorities. March of the Living delegations will be arriving in Israel Tuesday morning from Warsaw and will begin their tour of Israel in Jerusalem. At no time will they be visiting the areas that have been targeted by the terrorist groups from Gaza.

Sderot – A partner community under fire

In our partner community of Sderot, this weekend’s terror is, unfortunately, a far too familiar reality. For the past 18 years, the people of Sderot have been the target of tens of thousands of rockets fired from terrorists in Gaza. These rockets have caused deaths, gruesome injuries, significant damage to homes and property, and psychological distress.

The connection between Sderot and the Toronto Jewish Community is strong, built on a strategic partnership with UJA Federation of Greater Toronto that dates back almost 15 years. The relationship is based on UJA’s unwavering commitment to ensuring the city's resilience by investing in infrastructure, social services and education programs that offer opportunities for the next generation to become the city’s future leaders.

The support of UJA and its generous and dedicated donors is especially meaningful during challenging times like these.

For the latest update from Sderot, please click here to read comments from Eddy Azran, UJA Federation’s representative in Sderot.

For the latest news coverage about the situation in Israel, please click the links below. At least three Israelis dead, dozens wounded after barrage of rockets.

To the victims, may their memories be for a blessing. To the injured, we wish a speedy recovery and we continue to pray for quiet, peace and security for all.