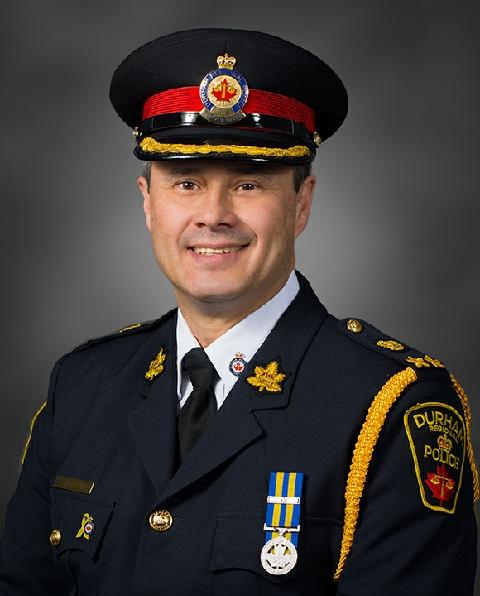 Inside UJA: Meet UJA's New Head of Community Security
In conversation with former Durham Deputy Police Chief Chris Fernandes
On June 28, UJA welcomed former Durham Deputy Police Chief Chris Fernandes as our new Vice President, Community Security. Chris brings a wealth of law enforcement experience from a three-decade career that took him from patrolling the streets of Scarborough, to Toronto’s elite SWAT squad, to leading more than a thousand police and civilians as a senior officer in Durham Regional Police. Chris sat down with UJA’s Brendan Steven for an interview about Chris’ extraordinary career and what he has learned about leadership, security, and working with communities to meet their unique needs.
Let’s start from the top. What led you to law enforcement in the first place?
Growing up in Scarborough, I had an interest in policing as early as eighth grade. I was always fascinated when I saw police cars. It was a calling that never left me.
Where were you first stationed after training?
I started in Scarborough, in the cars. They call it the Primary Response Unit. I was a patrol officer, responding to calls from the community. I dealt with just about anything you can imagine—domestic incidents, neighbour disputes, trespassing, things like that.
What did your transition to leadership look like?
I was reassigned to the Street Crime Unit as a detective constable. Our mandate was investigating gangs and street crime in Scarborough. From there I went to Toronto’s Emergency Task Force—SWAT, essentially—where my leadership progression really started. I spent eight years there with my last three years as a commander, running a tactical team. I participated in approximately 500 critical incident calls during those eight years.
“Critical incident call,” what’s that?
Situations involving weapons, hostages, bomb threats—any time a patrol officer feels the situation has reached a threshold where they need a special unit to come in.
What was it like to be part of an elite unit?
The tactical team is highly disciplined. You’re constantly working out and training, always at the top of your game. I always wanted to get there during my career. It taught me how to make critical decisions in crisis situations with calmness, logic, and objectivity, making everyone safer.
When you entered a leadership position, you took on wide-ranging roles within the Toronto Police Service. What happened after you left the Emergency Task Force?
I was promoted to staff sergeant and spent most of my time in downtown Toronto working in a unit charged with community partnerships and outreach. That meant leading and managing hundreds of demonstrations, special events, and overseeing security for the Toronto Entertainment District back in the early 2000s. In the heyday of the Entertainment District, these were quite the event on summer Saturdays.
I can only imagine!
In a small area with 80 to 90 bars, that could be more than 50,000 people to manage on a regular Friday or Saturday night.
Throughout your career, what were some of the most important lessons you learned about keeping people safe? What are you most proud of, looking back?
Right up there is the importance of partnering with the local community. For instance, when I ran the Toronto Anti-Violence Intervention Strategy Unit, that involved working with the most at-risk communities for gun violence to understand what they needed from us. I was blessed to have the career that I did. I learned that you can't police in a silo. You need those strategic partnerships to be effective.
In all that time, did you ever work with the Jewish community?
Yes! The police in Toronto have a wonderful relationship with the Jewish community. It was, and is, a great partnership: the Jewish community is very fond of the police, and officers love working with the community.
As you take on this role with UJA, what most excites you about the opportunity?
My passion is serving the community, keeping people safe, and ensuring their well-being. This was a great opportunity to do that—something I love doing, and have been successful at for many years. It’s something I believe I’m best suited for.
To learn more about UJA Community Security and the work of Chris’ team to keep our community safe, visit www.jewishtoronto.com/community-security.
Brendan Steven serves as UJA’s Chief Writer.
Chris Fernandes serves as UJA’s Vice President, UJA Community Security.