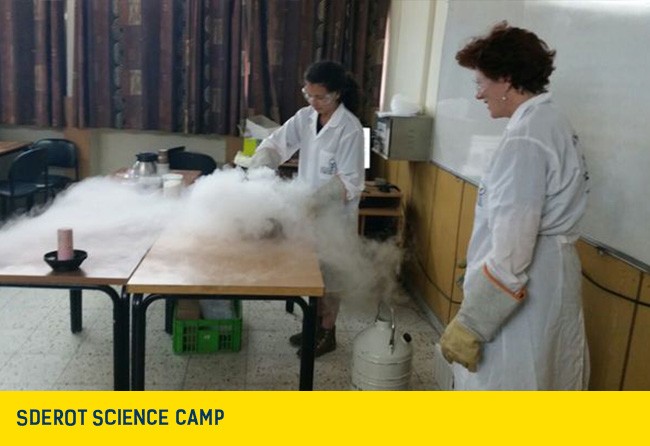 The students – boy and girls – study at local religious high schools in Sderot.

“We conducted all kinds of experiments and learned about optics, DNA, the moon and the solar system,” says participant Menachem Cohen.  “We also made ice cream using liquid nitrogen.  We really learned a lot.”

The camp was organized by Beit Yatziv, an educational complex under the auspices of the Rashi Foundation.

The program is part of a new initiative to improve the teaching of STEM subjects (science, technology, engineering and math) in Sderot, a town of 25,000 residents which is located just one kilometer from the Gaza Strip.  The initiative was launched by UJA Federation of Greater Toronto and the Rashi Foundation, in partnership with the Sderot Municipality and the Ministry of Education.

“The science camp in particular, and the STEM initiative in general, aims to increase students’ enthusiasm for science and to encourage them to choose to major in science in high school,” says Edna Cohen, the Ministry of Education’s inspector of science for the southern region.

As part of the Sderot STEM initiative, science centers recently opened in five local elementary and junior high schools, in partnership with the YTek and the Technion.  The science centers focus on experiential learning and increasing motivation by exposing students to cutting-edge fields, such as robotics, electronics, computers, biomedical engineering, aeronautics and aerospace.

“We are delighted to be part of this initiative,” says Debbie Kimel, co-chair of UJA Federation of Greater Toronto’s Israel and Overseas Committee.  “The STEM program represents Sderot’s determination to provide the younger generation with hope and opportunity, and to create a beacon of excellence in the Negev.”

UJA Federation of Greater Toronto has been partnered with Sderot since 2005, and has pioneered a number of important educational initiatives, mostly focused on developing young leadership and creating community resilience.