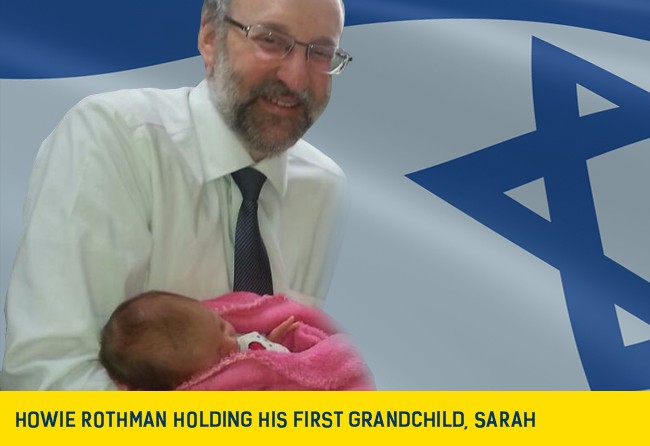 By Daniel Horowitz --Tuesday’s horrific attack on Jerusalem’s Kehilat Bnei Torah synagogue, where Palestinian terrorists killed four Jewish worshippers and injured five more, has profoundly, tragically and permanently affected the lives of a man who grew up in Jewish Toronto, and his family.

Howie Rothman, 54, a father of 10 children ranging in age from 4 to 24, six of whom still live at home, was deep in prayer when the terrorists began their barbaric attack, suffering multiple stab wounds to his head, neck, eyes and arms.

Howie, who graduated from Toronto’s TanenbaumCHAT, has already lost an eye and undergone three surgeries, and is presently in a medically-induced coma. He has also suffered brain damage and, as the family’s sole bread winner, the Israeli government employee will no longer be able to earn an income. Howie’s 80 year-old mother lives in Toronto.

Howie and his family are desperately in need of our help.

“He couldn’t hurt a fly,” said Howie’s 17-year-old daughter Yaffa. “He puts other people’s needs in front of his. And he shouldn’t be suffering. It’s not supposed to happen to him.”

Contributions to this Fund are not tax-receipted/deductible, due to CRA regulations.