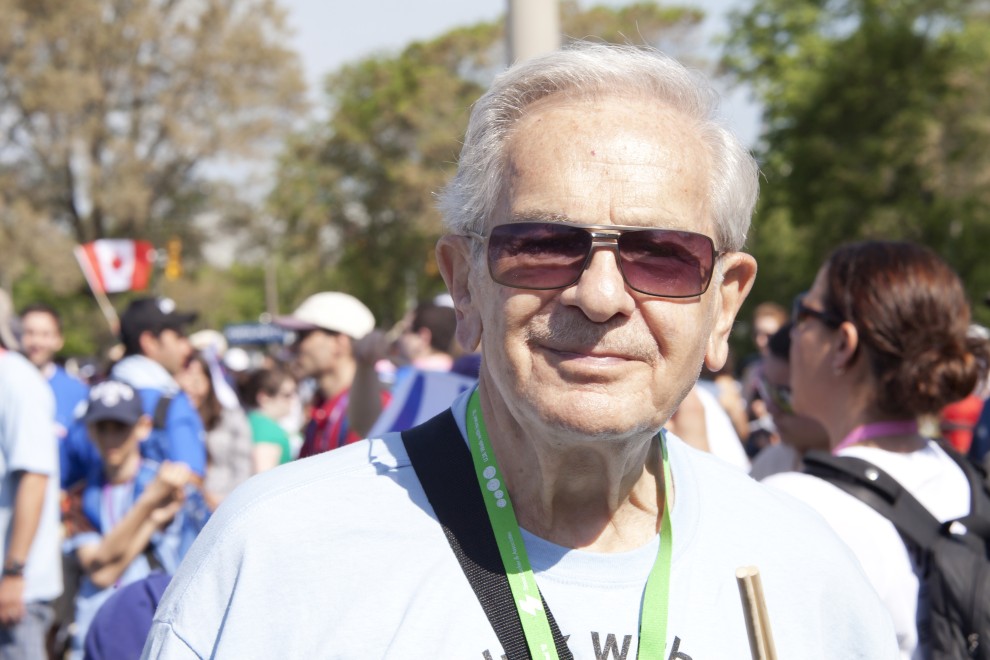 While most nonagenarians could be excused for wanting to put their feet up and take their “golden years” easy, 91-year-old Sam Hershenhorn continues, as he has done for the past 47 years, to put his feet to much better use.

Since the inception of UJA Federation’s signature event, the Walk with Israel, Hershenhorn has joined thousands of other Torontonians in this - the Diaspora’s largest single-day Israel solidarity walk - helping to raise money for UJA’s ongoing, transformative work in the Jewish state.

This year’s Walk, taking place on May 22nd, will be the ultimate “family project”, as Sam takes to the streets of downtown Toronto along with his children, grandchildren and great-grandchildren.

”Well, actually, some of my great-grandchildren are still a bit too young to Walk with Israel, so it’ll be more like ‘schlepping with Israel’. But call it what you want; the important thing is that we’ll be together on that day when the Jews of Toronto show Israel – and the world – that we are proud to be Jewish and that we’ll never be silenced,” says Hershenhorn.

As one of the top annual fundraisers for the Walk with Israel – he raised $45,000 last year - Hershenhorn believes that his career as a salesman has helped him with his fundraising success.

“I learned a lot from selling women’s clothing, and I use my sales experience in my fundraising which is basically, Don’t take no for an answer. I got thrown out of plenty of stores when I was selling clothes, and I guess I just never got the message because as soon as they threw me out, I’d come right back in until they gave me an order,” says Hershenhorn.

“In raising money for the Walk with Israel, I always do my research and begin by sending holiday greeting cards to everyone who gave me a donation the previous year. In sales, you always want to make sure people remember you. I’ve also been to Israel countless times since 1971, and every time I’m there, I see that the country has certain needs, so I always let prospective donors know what UJA does there with money raised by the Walk.

“Whether it’s infrastructure, social services, or education, I know that by letting donors perform a mitzvah, they would feel good. I get their sponsorship, and the people of Israel benefit. It’s a win-win for everyone.”

For a man who grew up in 1930s Poland, amid persecution, pogroms and Hitler’s rise to power, it must be a strange, but wonderful feeling to not only live a full and proud Jewish life, but to be able to join some 20,000 other Jews and publicly declare their love of Judaism and of Israel.

“We must make sure that Israel continues to grow and strengthen so that we always have a Jewish state; a Jewish home. While my great-grandchildren may be too young to visit Israel today, they’re going to want to in the future, so we have to make sure they have that option. In fact, maybe I’ll go with them; after all, they’ll need someone to schlep them around,” laughs Hershenhorn.

To sponsor Sam Hershenhorn for this year’s UJA Walk with Israel, click here .