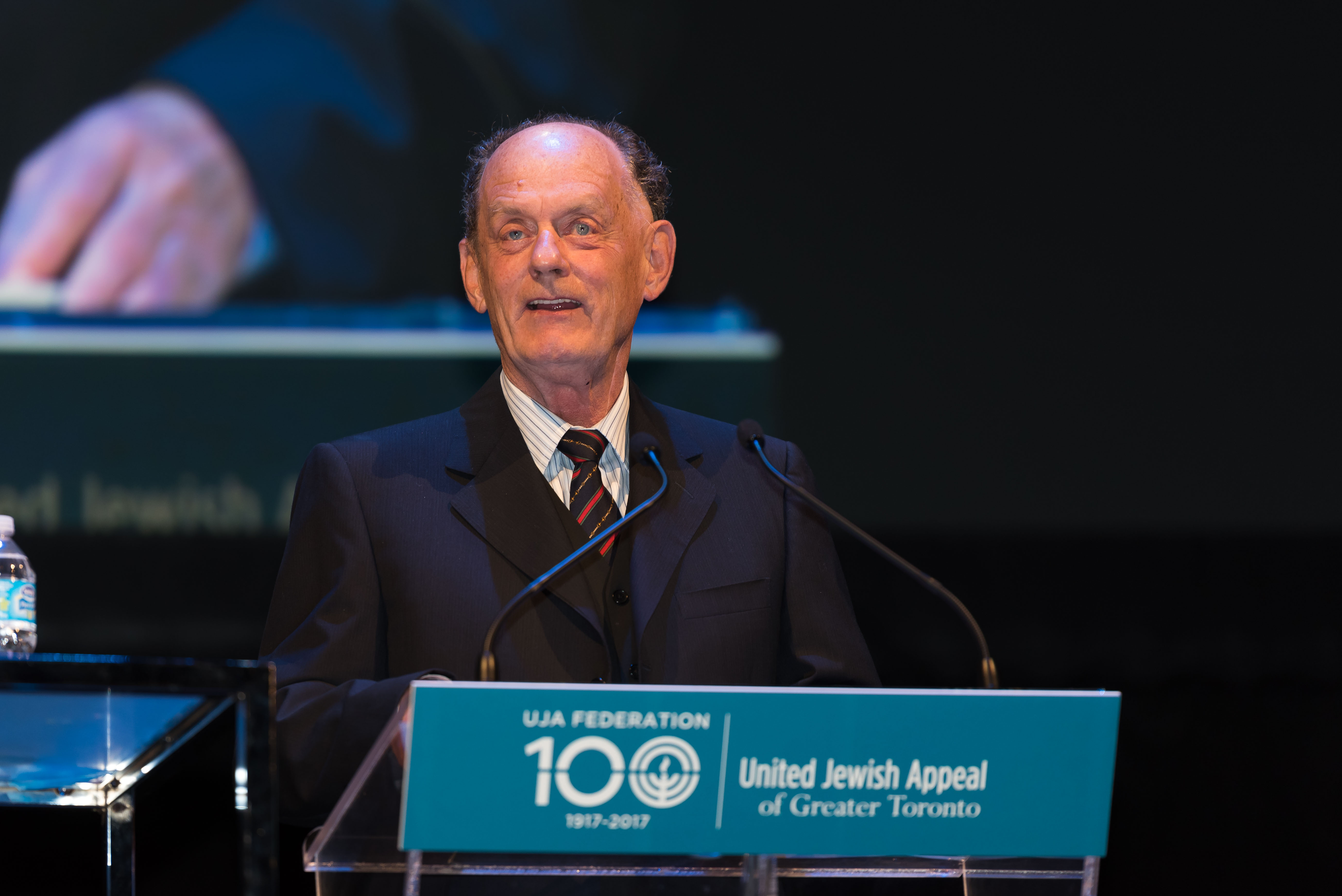 NOTE:  What follows is the background thoughts of the talk I gave to the United Jewish Appeal, in Toronto, Sunday, Sept 13, 2107. What those present heard was not this; but came of out this. My remarks that evening were (mainly) an extempore rendering of the thoughts presented more orderly here.

The United Jewish Appeal will excite some wonder a Newfoundlander, born on a strip of land named Irishtown, in a town called Carbonear, which owes its nomenclature to sixteenth century Portuguese, and whose surname “Murphy” is not to be found – so far as I know – in any of the riot of names in the most promiscuous of Jewish Chronicles, not even in the blossom rich catalogues of Deuteronomy, is now in an Ontario theatre, and speaking to a Jewish appeal, when there is so little Jewish about me, and according to a near universal consensus I have absolutely no appeal what so ever.

"There is a divine covenant in everyone’s heart: to love his native soil—despite its climate." ~~ Midrash Genesis R. 34:15

What has Israel to offer the world? Something huge.

A chance to tune its conscience, as difficult as it may be to believe at times that  the world has a conscience and even granted, and even more that it desires to tune it.

Anti-Semitism is as old as granite and twice as hard.  The only quality fit to stand next to the intensity of anti-Semitism is its longevity.  It was in the atrociously belated recognition of the full force of anti-Semitism’s passion, the dark fire of Hitler and the Holocaust, that the world, in shame and guilt, gave assent to a haven, a sanctuary for the Jewish people, in the very land where of old Jacob was called, Solomon spoke wisdom, David sang, and Moses delivered the Law.

History cannot be corrected.  For that which is done cannot be undone.  But it may be amended.  And that is what, following the great woe of the past century, when Hell set up its own workshops in the camps of Poland and Eastern Europe,  the world intended, or professed it intended, in marking Israel’s return into history after millennia of exile,  torment, subjugation, pogroms and persecution.

For once: a safe harbour against the never relenting storms of anti-Semitism.

Properly considered, and these I know are large words, Israel, the fact of a Jewish home, offered to non-Jews a chance to turn the arrow of history:  to say, finally:  “After what we have seen, after what some of ours have done, this can be no more. What we have always known and kept silence over, we now acknowledge: our own carelessness and indifference to the historical miseries and horrors which has been the dark inheritance of Jewry from the ancient days of the Babylonian exile to the vast sadistic whirlwind of yesterday which consumed the six million.”

What then, in this, does Israel have to offer to the world?  After the Hitlerian descent – no small thing –  the shade of redemption. Not a path back to innocence, that trail is long since overgrown and fatally lost, but some lifting of the weights of complicity, omission and indifference which fed the tireless energies of anti-Semitism. But something in the nature of a measure of needed expatiation.

No small thing indeed. Having witnessed Jewry been driven into the shadow of that Valley spoken of in the Psalm, a vow came first from the victims and persecuted themselves, then from the lips of at least some of the world, the vow of Never Again.  That Jewry would never be driven into that shadow again, that the world would never give assent or mere silent witness to another cloud of death settling upon the Jewish people.

The consideration that the world, and in particular the peculiar and tattered organ of its conscience the United Nations, has been so absurd and malicious in its attentions towards Israel, brutal in its crazed zeal to make Israel the scapegoat for  the mischiefs of warmongers, dictatorships and petty tyrannies, does not displace what Israel offers the world.

It merely invites a kind of sorrow that the world so reluctantly moves to accept a gift it needs, more than those offering it need to make the offer. Declining a compass will not change the infallible pointing of its needle.  The contemplation of Jewish history and the establishment of the state of Israel offers a North star to much of the conduct of the world.  It may tune its conscience by dedicated reference.

What other gift, from example flows?

Seriousness and courage.  There was a democratic election in the United States a year ago.  When it was over the faculty of some of America’s most prestigious universities – havens of the mind remember –advertised grief counselling and healing centres for students and others who had voted for the losing candidate. They were offering post-trauma rehabilitation for the voting-disappointed.

My friends of the UJA – our part of the world will not end in fire, nor in flood or famine.  It will perish from silliness, complacency and self-absorption.  Personally speaking I would prefer another ice-storm, such as fell on Quebec city, to visit Toronto than hear it has a franchise from the Real Housewives of Beverly Hills.  When I heard “Muskoka is our Hamptons” there was not enough Pepto-Bismol in all the world to halt the hurl.

Much of the West plays with life, plays with mock-life with “reality tv” and an eternal stream of distractions, vulgar, childish, degrading, witless or all combined.  one country has traded the deep cadences of the Declaration of Independence for the mindless stammerings of twitter.  Politicians have the depth and vigor of recently mowed dried grass.  Our public life is hardly a notch better. And the debates of the day are bathroom liberation, taking the name of the nation’s founders off its public schools  - at the request of teachers!, and government pot shops. Burke, Churchill, and Jefferson revolve at high speed in their troubled graves at what we have made.

However, there is surcease – a place to remind ourselves that dalliance and distraction are drugs against reality.  That life is not a glissando over superficialities, and when it loses depth and meaning it is not what it should be.

When I read the biographies of Israel’s statesmen and women most of all I feel and admire the power of the attachment to Israel’s founding purpose of leaders and citizenry.  There is no divide.  And surely it is a prudent thing that leaders have tasted life in the ranks they now command. They have shared every danger, entered every battle, lost son, brother or sister, and somehow welded the necessity of always being ready for mortal combat against intransigent foes, with the more tranquil imperatives, the equally necessary routines of family life and genuine domesticity.

We ever so rightly made much of that horrible day on Parliament Hill when young Corporal Cirillo was murdered and the Sergeant of Arms performed so bravely.  Their example galvanized the whole country in a grand coupling of sorrow and admiration. We thank God, but not often enough, that such moments are exceptional in this tranquil country.  What is exceptional here, the irruption of violence in the life of the nation, has been for many days since the Declaration of Israel’s Foundation by ben Gurion, the actual pattern of normal life.

Through successive wars and intifadas, terror bombings and kidnappings the unresistable question arrives – could the citizens of any other modern democracy find the resources of heart and will to maintain the divide between fight and family, the normal and the extraordinary, as Israeli citizens have done?

Life in Israel is always earned and never given, and though it may be an impertinence for an outsider to make this judgment, I think it is fuller, more serious, and certainly more savoured as a consequence. One of the Jewish sages wrote:   "This world is a raging ocean and you should imagine yourself always in a ship at sea."  It is an urging not required of an Israeli – the sea is ever in tumult and it is all about him; the ship is Israel and it is must be commanded with courage and artistry or it flounders, and all within it, once and for all.

What Israel – at always great cost – reminds the world, is that the intervals of calm, without strife, the intervals of plenty and security, of easy time with your children and peaceful order in your life – are not given – but secured; products of courage, diligence and resolve;  and when secured, to be guarded in proportion as they are treasured. .  That values achieved must be constantly appreciated and reinforced by the memories of those more “normal” times when they have to be fought for and with mighty industry built.

This is what Israel offers the world.  Adult understanding of what life and the world is.  A reminder that courage – not posturing, partisanship or playacting – courage is the foundation of democratic citizenship.  This – in addition to the marvels of building a state in a wasteland of sand -- victory in wars fought to extinguish it; maintaining democratic values against all pressures, scientific and educational excellence out of all proportion to its population and situation.  Any one of these would be a great offering in itself.

But, I think, the cautions it offers, and the potential repair to the larger conscience of the world is an even deeper gift.  And, therefore your support for Israel, the United Jewish Appeal’s contribution to Israel’s growth and safety is a gift, potentially, to a cause that extends even beyond your immediate object: the state of Israel itself.

The creation of the Jewish state, for all the jubilation of its founders during the Day of Declaration, was also necessarily and  inconsolably a melancholy event.  Even on that day memory and pain and inestimable loss were so near as to be tangible. Three years after the enormities of the death-factories, who was there to say, who could say the darkness had been lifted from the face of the earth?

But if it may be dared, after the deepest night the promise at least of the brilliant sunrise.  Israel had returned.  In so far as the world attends to that vow, and understands that supporting Israel is a condition of its own moral forthrightness, Israel’s return to the world gave secure direction to the needed path of expatiation.