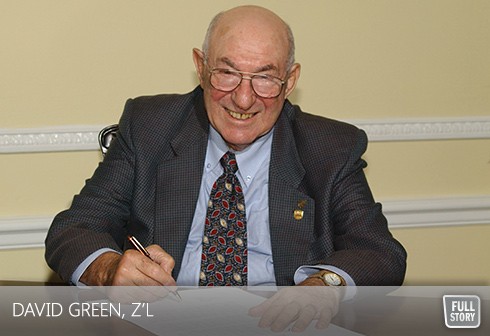 By Daniel Horowitz--There are leaders, and there are those who lead.

David Green, who passed away on September 9 at Sunnybrook Veterans Centre, led by example; personifying the best of leadership through his innate ability to inspire and motivate those around him.

A Veteran of the Second World War, David, who was born and raised in Toronto’s “Junction” area, was a regular at UJA’s Lipa Green Centre where he would take to the phones, canvassing donors and sharing his life stories.

“David was a special person, whether at a telethon, or at his desk in Lipa Green, calling people to follow up on their pledges, or looking after arrears, David always had a smile on his face,” said David Engel, a long-time UJA volunteer and a Chair of UJA’s Annual Campaign in 2000. “He was such a wonderful and positive role model to so many and he felt, very deeply, that canvassing community members for donations to the UJA Campaign, was a lifetime responsibility.  He will be missed, but his legacy will live on.”

One of 10 children, David joined the Canadian Armed Forces in 1940, serving in the Argyll and Sutherland Highlanders and was MIA and subsequently a prisoner of war in Belgium. He was the first prisoner to be liberated from Stalag 357, just north of Hanover, and when he returned to Canada, David wasted no time in setting an example of volunteerism and tzedekah to future generations.

“My father and my late mom, Sylvia, met on a blind date,” says daughter Miriam. “They were together for almost 65 years when she passed away in 2010. Although they had completely different personalities, mom and dad loved each other very much, and had an unbreakable bond. She loved to play mahjong, he was an avid golfer. And their relationship worked; as he became more and more active in the Jewish community and in the business world, she preferred to stay home and take care of the house.”

In 2003, David explained his uncommon passion for tzedakah and UJA in his Book of Life story, The Jewish Foundation’s archival collection of stories from those who have left a legacy to ensure the future of Toronto’s Jewish community.

"I never really thought much about philanthropy until I came home from serving in Europe in World War II,” wrote David. “That experience greatly affected me. I saw some of the horrors of the Holocaust firsthand and realized the importance of building a strong Jewish community.”

“David Green was a wonderfully kind and compassionate gentleman, and a strong supporter of, and volunteer for the Jewish Foundation of Greater Toronto,” says Ronit Holtzman, VP, Planned Giving & Endowments, Jewish Foundation. “David demonstrated his tremendous vision by opening his fund at the Foundation in 1990, making him one of our earliest supporters. Today, the Sylvia and David Green  Philanthropic Fund continues to support a myriad of organizations that were near and dear to his heart, including a perpetual gift to UJA’s annual campaign.”

“David volunteered for UJA for an unbelievable 60 years,” says Jeff Springer, UJA Federation’s Senior Vice-President, Corporate Affairs. “His passion and belief in community motivated him to contact donors for their support year after year.  He was so committed that we had to create an award to recognize him and of course, we called it the Dave Green Award.  His visits to my office for a schmooze and a drink are wonderful memories that I will always cherish.”