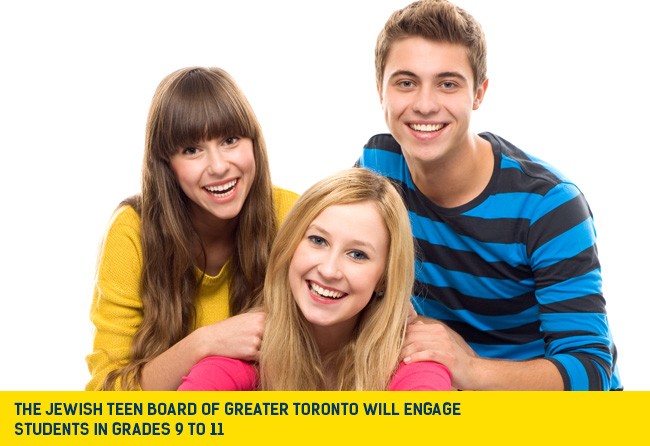 The Jewish Foundation of Greater Toronto – UJA Federation’s planned giving and endowment arm - is excited to announce the establishment of a new teen foundation board launching in fall 2015.

Dubbed the Jewish Teen Board of Greater Toronto, the new program - in collaboration with WOW!, an initiative of UJA Federation’s Julia and Henry Koschitzky Centre for Jewish Education - will serve students in grades 9 to 11-  engaging them in an exploration of Jewish values and strategic giving while making a difference in their communities and around the world. The project will also provide participants with the opportunity to earn 40-plus hours of community service.

A project of the Jewish Teen Funders Network (JTFN) and funded by Laura Lauder and the Maimonides Fund, the Jewish Teen Board brings the success and impact of Jewish teen philanthropy programs across North America into cities around the world.  Teen participants engage in a group grant-making process guided by Jewish values and build new leadership skills while employing the principles of strategic philanthropy.

“This program will give teens the power to bring real change in the community,” said Lisa Draper, Chair of the Jewish Foundation “By having our participants work with non-profits and charities, we are creating community leaders and making philanthropy accessible for teens from all backgrounds.”

Toronto’s Jewish Teen Board will launch this fall along with Boston and Melbourne, Australia, joining the first cohort that launched last year at San Diego Jewish Community Foundation and The Jewish Fund in Detroit.
For more info about Jewish Teen Board of Greater Toronto, visit http://www.jewishteenboard.com