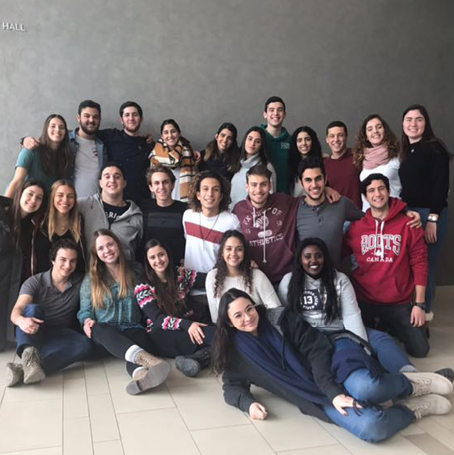 The first Hanukkah I can recall was in a dusty Kibbutz parking lot area. A memorable experience was probably what Kibbutz Eilot’s Holiday team was aiming for, as they gathered a hundred families in a rocky deserted parking area which was shared by a few Subarus of the ever present in Israel nineties model. From there we would all be marching as a “unified” community with our proudly held  home-made torches. Although this might not have been the organizers’ original message; still these images resonated with me as I grew up and tried to give meaning to these childhood rituals. There are two significant motifs to that experience of Hanukkah; that unpaved old parking lot and the the way we held those flickering torches to light up the night.

In my eyes, this mixture of the parking lot and the light of the flames, relates to the UJA ShinShinim program. The program was founded 11 years ago with two 18-year-old Israelis who postponed their army service, to come and volunteer in Toronto Jewish Community. This UJA start-up that aimed at fostering an authentic People-to-People relationship between Israel and the Toronto Jewish community, never stopped growing. Today, with 25 ShinShinim, 40 institutions, 75 Host Families and new relationships being created every single day.

The Parking lot; The name of Hanukkah–according to some sources- is derived from the Hebrew word “Hanu” – “parked”, which refers to the Israelites when parked for the 8 days in front of the altar. Ha’Chanaya – the parking suggested, is a spiritual one – to stop and reflect.

As I have experienced 11 years ago, the ShinShinim year of service is a year-long “parking” time. For us, young Israelis, who have experienced a different journey prior to arriving at the Jewish community Parking lot, for us - these  12 months are time for reflection upon our beliefs, social views, and above all –upon our responsibility towards the global Jewish community.

Light of the flames; the Hanukkah analogy of light and darkness could not symbolize better the ShinShinim program. The beauty of it - is that at any given moment someone else takes on the role of shedding light over some darkness, holding the torch. One moment, it is the ShinShin in the school hallway, shedding light on the everyday life of an Israeli teen. The next moment, it is when the synagogue congregant illuminates on what it really means to have a strong Jewish identity outside of Israel.

This “speed of light” in the Jewish community flies in unexpected directions, and lights up dark places in both Israel and Canada, mutually.

Although the group of 25 ShinShinim is parked in Toronto for a year, each and every one of them lives in a home with a Host Family. As the year goes by, the ShinShinim realize that the terms Home and Family have special characteristics; Home becomes a dynamic term, while Family becomes the ever growing one.   Throughout the year, the ShinShinim get to have multiple homes other than their Israeli one, which will hopefully remain as such for years to come.  Spending the holidays, sitting around the Shabbat table, and sharing their stories together, the ShinShinim and the Hosts become a larger and diverse family.

On December 10th, just in time for Hanukkah, the ShinShinim expressed their deep gratitude toward their new family members, in an event that was aimed at exposing the Host Families to the social dilemmas Israelis are often face, through their personal family stories.