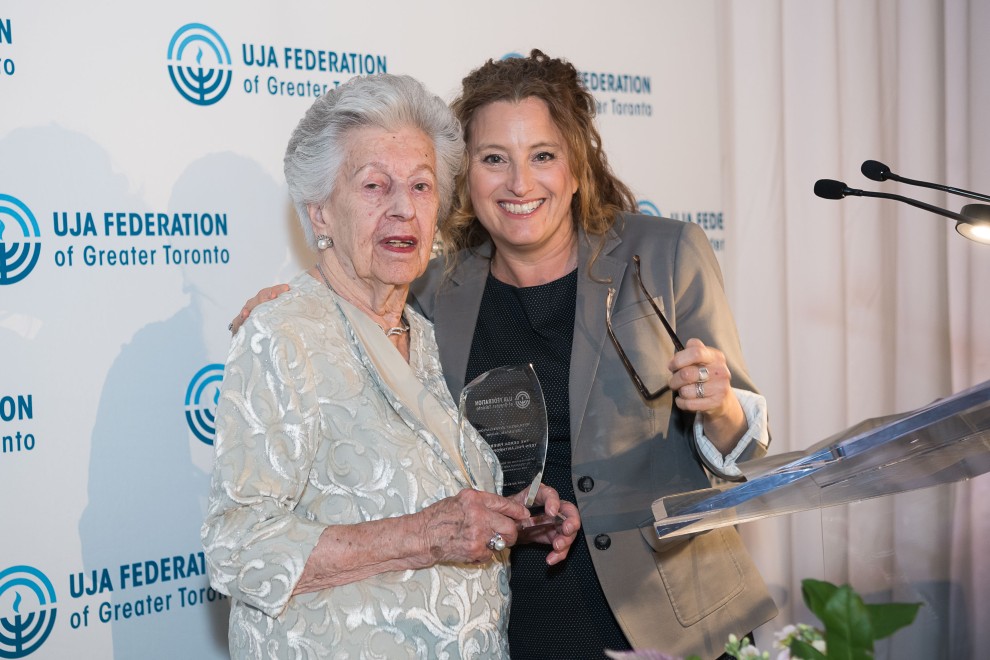 It took extraordinary courage and strength for 14 year-old Gerda Frieberg to survive deportation from her native Poland and three tortuous years in a Nazi concentration camp during the Holocaust. Seventy-three years after liberation, it was with immense pride that she presented the inaugural Teen Philanthropy Award bearing her name at UJA’s 13th annual Volunteer Awards Night.

Strength, courage and pride are the hallmarks of Gerda’s journey from her happy childhood in Upper Silesia, Poland to the torments of slave labour in the Ober Alstadt women’s concentration camp in Sudetenland and her eventual immigration to Canada – via Israel, in 1953.

Of her extended family of 172 people, only Gerda, her mother and sister survived.

It took strength for Gerda to overcome the brutality she had experienced, to start her life anew in Toronto and build a family. It took courage when, in 1962, she became one of the first survivors to share her personal experiences in the concentration camp at local schools and, ultimately, all across Canada.

And it was with no small sense of pride that she received an honourary diploma (among the many accolades she has received over the years) from a Mississauga High School in 2013, after sharing her story with students and lamenting her failure to graduate high school and receive the diploma she so dearly wanted – a rite of passage denied her by the Nazi deportation.

Indeed, Gerda has spent the better part of her life in Canada as a community activist and volunteer, working on behalf of those causes she cares most deeply about, including Israel and Holocaust education and remembrance. She believes deeply in the principle of Tzedekah, and giving back to the community-  a value she learned early in life when her mother would prepare food for her to deliver to elderly Jews in need prior to the Holocaust.

Now, after a lifetime of dedication to the Jewish community, Gerda has endowed the new Gerda Freiberg Teen Philanthropy Award, to encourage the pursuit of philanthropy and volunteerism among the youngest members of our community.  The first recipient of this honour, Grade 11 TanenbaumCHAT student Zachary Winkler, began his philanthropic career raising money for SickKids Hospital when he was only six years old; it is now an annual community-wide event that has raised over $100,000 to date.

Under Gerda’s leadership and guidance, and with Zachary as the model of teen philanthropy, the goal of this prestigious award – to empower young people to help our community grow and thrive, is clearly having its anticipated effect. Importantly, it will ensure Gerda’s powerful legacy – and the strength, courage and pride she has demonstrated throughout her life, becomes part of the fabric and future of Jewish Toronto.