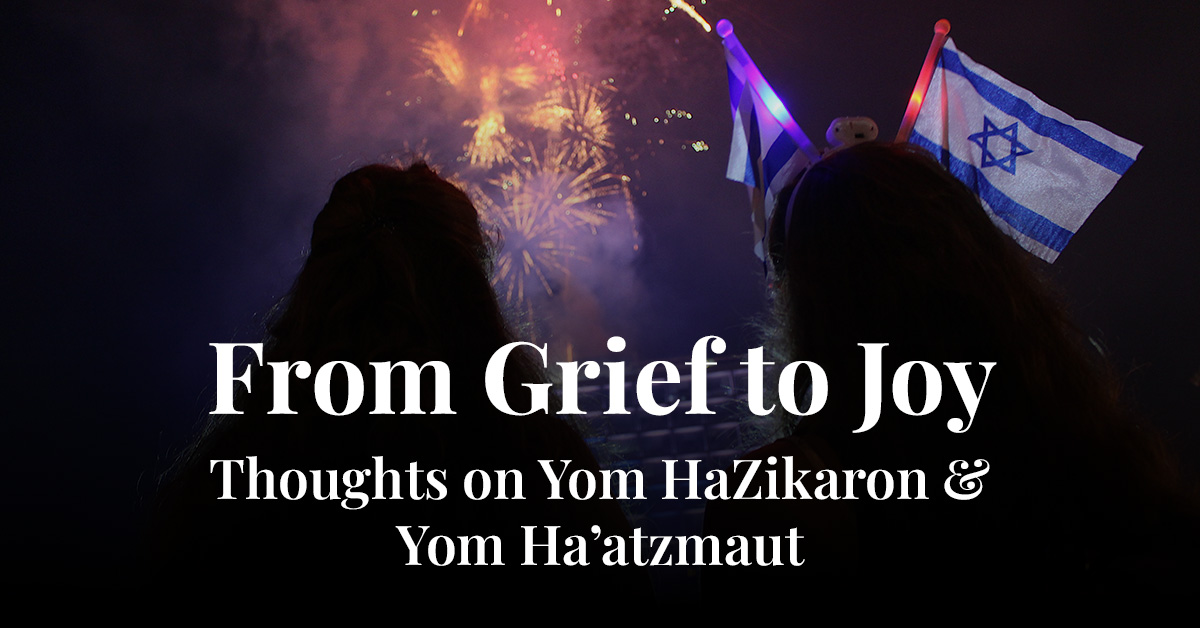 In two stunning headlines, the cover page of a recent issue of the UK newspaper The Jewish News captured the paradox of Israel today.

“The Hope: Israel hosts Arab states for historic talks,” declares the first headline. Beside it is an image of the foreign ministers of Israel, Bahrain, Egypt, Morocco, the UAE, and the US—with hands joined and eyes beaming.

“The Hate: Arab terrorists murder 11 in eight days,” cries the second headline. In a chilling image, emergency workers walk next to a car that lies on its side. A smashed hood and scattered debris testify to the moments of chaos and terror just hours earlier, which stole the lives of several innocents—including a heroic Christian Arab Israeli police officer.

How do we reconcile this contradiction between the hope and the hate? Between an Israel of growing friendships and opportunities, and an Israel marked by shattered glass and shattered lives?

The answer seems to lie in the Jewish calendar. Today is Yom HaZikaron, Israeli Memorial Day, on which we remember and mourn victims of terror and those who fell in service to the country. As the sun sets in a few hours, the heaviness of Yom HaZikaron begins to lift and the joy of Yom Ha’atzmaut—Israeli Independence Day—is upon us. The transformation is virtually instant.

It’s as though the Jewish calendar is telling us: when hate and pain are inflicted on us, our answer must be hope and life. Our mourning is about memory, not despair or demoralization. And when the moment comes to move from grief to joy, we dare not delay in making that transition.

This means not only mourning and celebrating with Israelis these two days. It means joining the people of Israel in taking actions all year-round that tip the scales from hate to hope. While there are many ways that each of us can do so as individuals, one of the most powerful ways that we do so as a community is through UJA’s annual Walk with Israel.

When our families gather to Walk with Israel, we model Jewish pride and solidarity for our children and grandchildren. When we wave Israeli flags in the streets of Toronto, we show our neighbours that we are secure in our authenticity. When we volunteer or donate to the Walk, we support programs that heal Israeli victims of terror and trauma—and many other initiatives that build this beautiful country and the hope it represents. I encourage you to join us on Sunday, May 29th, as we Walk with Israel, together in person once again.

Israel’s establishment marked the self-emancipation of the Jewish people. Today, we remember that freedom isn’t free. Tonight, we celebrate freedom and the opportunities it brings. None being more important than our opportunity to help build a world that will only know headlines of hope.

May the memory of all those we mourn on Yom HaZikaron be for a blessing. And may our entire community find renewed joy and purpose on Yom Ha’atzmaut.

PS: There’s nothing like commemorating Yom HaZikaron and celebrating Yom Ha’atzmaut in Israel. I encourage you to join us for an unforgettable 75th anniversary mission to Israel next year, where we will mark these special milestones together as a Toronto Jewish community alongside the people of Israel.