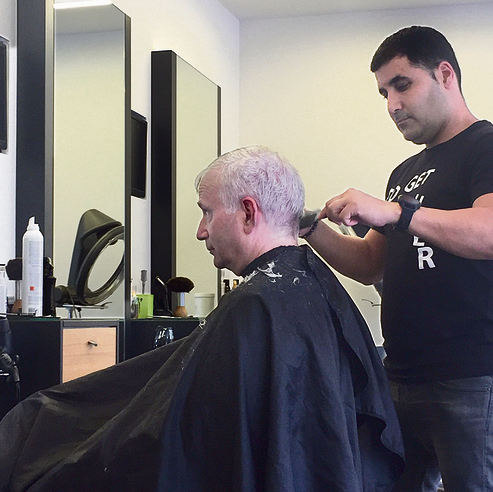 Meet David Matlow, 58, a Canadian Jewish philanthropist who flies to Shmulik and Ram’s Barber Shop on Emek Refa’im Street in Jerusalem each time he needs a haircut. Says Matlow, “I have only gotten my hair cut once or twice in Canada in the past 20 years, and I felt like I was cheating.”

There are plenty of people who have one favourite hair stylist that they frequent. But, not many will pay 50 NIS ($19CAD) for the haircut, plus more than $1,000 for the airplane ticket (never mind flying thousands of kilometres)!

But, Matlow is not “many people”. The self-defined Zionist-obsessed lawyer also has the largest private collection of Herzl memorabilia in the world, consisting of about 5,000 pieces. The collection, which is showcased in a special “museum” room at his house, includes a pen that Herzl used to sign his documents, as well as an authentic document bearing Herzl’s signature, a small tin box where Herzl used to keep notes and newspaper clippings, as well as 28 letters that he wrote. “Hertzl envisioned a state of Jews where normal things were being done,” says Matlow, “Getting a haircut is a normal thing”.

Last Friday, Matlow landed in Israel again with his wife Leanne, and shortly after made his way to the barber shop where Ran’s scissors awaited him. “It’s rare that I only come once a year; if my hair gets too long, my friends tell me it’s time for me to fly to Israel,” muses Matlow, who sometimes posts his thoughts on visiting the barber shop to social media, spicing up his experiences with commentary on the political situation in Israel. “This is truly my obsession. I literally call it the ‘Roots of Zionism’.”