Over the past couple of months, UJA Federation’s newly formed security team has been meeting leaders of as many community institutions – schools, synagogues, and organizations  – as possible, in an effort to establish greater community preparedness, confidence, and participation in our shared security. During this time, the security team has also been tracking an increase in protests and other disruptions of Jewish community events, including the UJA Walk with Israel in late May and this past weekend at the Israel Festival at the Promenade Shopping Centre. 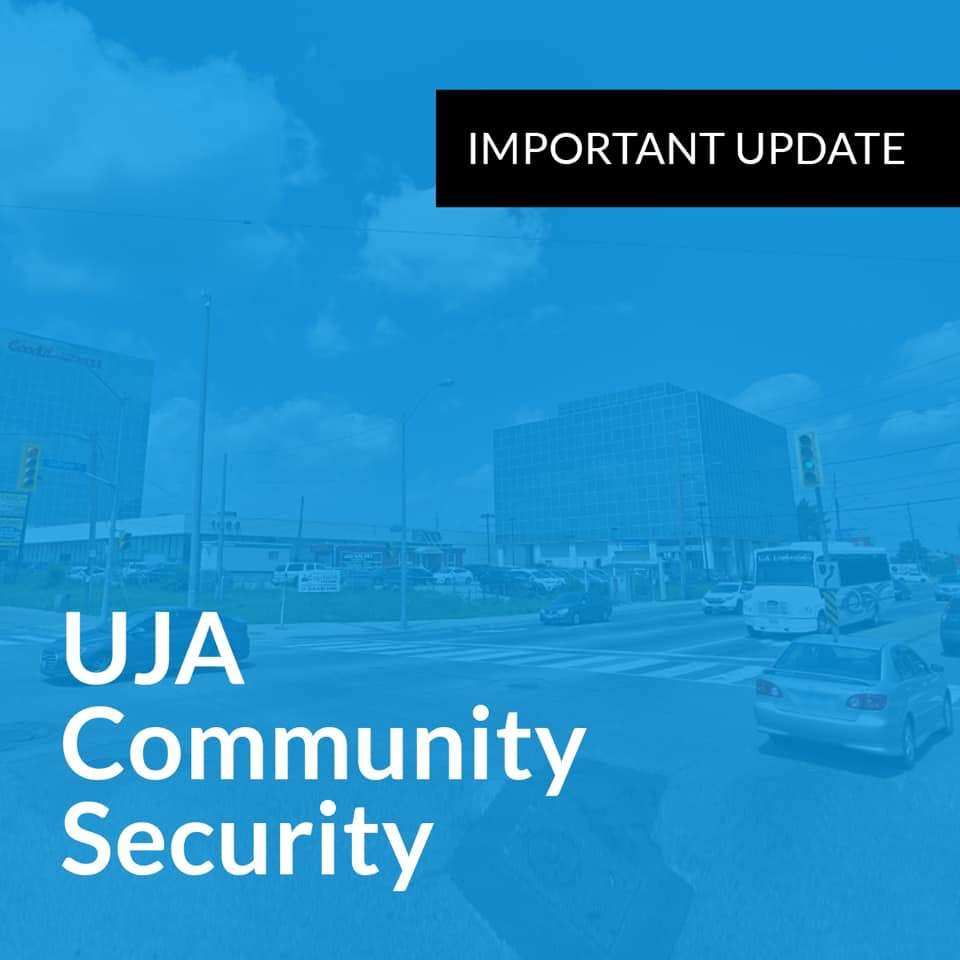 At this time, there is no information to suggest that there is any elevated risk posed to the Jewish community. Alongside our advocacy agent, the Centre for Israel and Jewish Affairs (CIJA), UJA Federation continues to foster strong relationships with law enforcement at all levels. We work closely with Toronto Police Service and York Regional Police to ensure the safety and wellbeing of our community.

Last fall, prior to the tragic attack in Pittsburgh, UJA Federation of Greater Toronto identified that a new community strategy was needed to meet the growing global and local climate of antisemitism, coupled with a continued focus on advocacy and education to stem this growing trend. That’s why UJA committed to a significant increase in its investment in community security, including investing resources to help our institutions prepare for potential crises and to develop proper emergency protocols.

Structurally, UJA Federation has assumed primary management responsibility for security-related activities in the GTA, a role that was previously seconded to our advocacy agent, the Centre for Israel and Jewish Affairs (CIJA), which will continue to be supportive locally and with its national security infrastructure.

Of course, strengthening our community’s security does not begin and end with the changes and investments to physical security. It also comes in the form of the work that we do with our partners to educate about the dangers of hatred, and the work we do, through CIJA, to counter antisemitism and advocate on behalf of the Jewish community.

While we will continue to work closely with police services to deliver appropriate responses to antisemitic acts of hatred or violence, everyone in the community has a role to play. Police can only react if they are aware. Posting a disturbance, crime or protest on Facebook is not a solution. Police are our partners in keeping our community safe, but they can only do that if we make them aware, so if you see something, say something. Victims or witnesses must contact the police directly to file a report and initiate the appropriate legal processes. In case of an emergency, dial 9-1-1. For non-emergency incidents that require an intervention by Police, please dial your local non-emergency number:

In addition, after reporting incidents to police, please contact me with all relevant information at 416-844-4815.

Our combined commitment to the safety of the Jewish community and of our institutions will substantively enhance community security, allowing everyone in the community to enjoy and live their lives openly as proud Canadian Jews.

*Ryan Clow is the newly appointed Director, Community Security, UJA Federation of Greater Toronto. Ryan began his working life as an Infantry soldier with the Canadian Army in 1996. In 2004, he left the Army to join the Department of National Defence as a civilian employee. From 2006 – 2012 he worked in Canadian Special Operations Forces Command, which is the headquarters for Canada’s most elite military forces. During that time, Ryan was awarded the South West Asia Service Medal with Afghanistan Bar for a deployment to Kandahar province, Afghanistan in 2008 supporting the combat operations of a special forces task force as an intelligence targeting analyst. He was also awarded the Distinguished Service Medallion for his role in the development of Canada’s first-ever Counter-Terrorism Strategy. Ryan left the public service for the private sector in 2012 and most recently consulted with financial institutions on anti-money laundering matters.