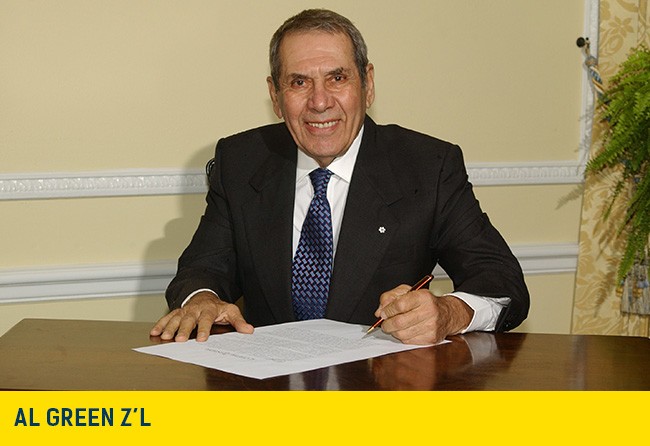 When Abraham Joseph Green z’l - better known by friends and loved ones as “Al” - passed away on January 22, Toronto’s Jewish community, and the community-at-large lost a man unlike any other.

As co-founder of Greenwin Construction, Green, who Chaired United Jewish Appeal’s Campaign in 1973, helped develop and shape the urban landscape of Toronto. He received the moniker of Dream Maker early on in his career because of his uncommon vision, compassion and generosity.

Green, who was awarded the Order of Canada in 2002 due to his unyielding patronage, left his fingerprints indelibly etched in the this city’s skyline through his generous donations of funds and materials used to build schools, theatres and community centres throughout the GTA. A generous and visionary supporter of UJA Federation of Greater Toronto, Al has established treatment centres for people battling substance addiction and funded The Artists’ Health Centre, a unique facility at Toronto’s Western Hospital to meet the occupational health needs of artists. A lifelong patron of the arts, and a renowned sculptor in his own right, Al opened a sculpture school for adults, donated studio space to struggling artists and was a principal benefactor to the Art Gallery of Ontario.

It was Al, along with his brother Harold, who built UJA Federation’s headquarters – the Lipa Green Centre for Jewish Community Services - on Sherman Campus on Bathurst Street, just north of Sheppard.

“Al was the eldest of the six children born to Lipa and Fanny Green,” said Rabbi Michael Dolgin, Senior Rabbi of Temple Sinai Congregation, in his eulogy at Green’s funeral held on Sunday, January 24. “But when they gave their first-born son a Jewish name, I don’t think they would have known how well they chose. We all knew him as Al, but he was Avraham Joseph. Avraham – the ultimate founder and visionary in a world where everyone saw one thing but Avraham saw another. And four-thousand years later we’re all here doing what we’re doing because of that vision, courage and tenacity. Those characteristics were so present in Al Green’s life in so many different visions and directions that he sought and created and founded and established. Whether that meant most important to him in his family, the way he directed and guided the very formation of the amazing city in which we live, or whether it meant this congregation. Al was perfect simply by being who he was; he was more than just a person in so many ways – he was a force of nature,” said Rabbi Dolgin.