Orthodox. The Yavne Zion Congregation is located in the Zionist Centre on 788 Marlee Avenue just south of Lawrence.

Services are held on Shabbat and Yom Tov. There is also a Sunday morning service.

The Yavne Zion Congregation – known as The Marlee Shul – is located at 788 Marlee Avenue, just south of Lawrence Ave West, in Toronto, ON. The Shul was founded as the "Yavne Shul" in the late 1800's in downtown Toronto and moved to its current location in 1963. The Shul's membership experienced a decline through the 80's and 90's as the Orthodox Jewish Community began to move away from the area. In June 2005, The Shul hired Rabbi Yehuda Oppenheimer and experienced an influx of young professional families from the surrounding areas. 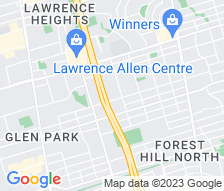