The hotline gives you the latest update about Toronto's eruv . The eruv is created and maintained to allow Jews to carry on Shabbat.

The boundaries of the Eruv are generally as follows: To the North: Highway 407 (now expanded) Check website

To the South: CP rail tracks which run between Davenport and Dupont;

To the East: CN tracks between Bayview/Don Mills. North of Steeles the eastern boundary to Highway 404.

To the West: (from N. To S.) CN tracks from Hwy 7, east of Keele to approximately Sheppard Ave.

The Eruv then follows the Allen Expressway south to Yorkdale at which point it follows Dufferin south to Castlefield.

From Castlefield, the Eruv runs south on Caledonia to the CP rail tracks.

Carrying is only permitted across Hwy 401 at the underpass located on Wilson Ave. just east of Bathurst Street and at Bathurst just east of Wilson.

A new eruv is being created in Richmond Hill which will be bounded by Major Mackenzie Drive to the North and Hwy 407 to the south. Where no boundary is readily apparent at Yonge and High Tech Road, inconspicuous wires that carry no current will be hung between hydro poles. The Richmond Hill eruv will eventually encompass the whole town and connect to the GTA's other eruvim. 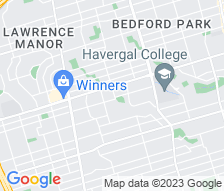